The Power Of Sound Vibration For Healing and Balance

The Power of Sound Vibration for Healing and Balance

I must admit that if you had told me some years ago that I would be playing with 3 other people in a sacred sound healing ensemble using gongs, Tibetan singing bowls, and other vibrational instruments, I would have just laughed at such a preposterous thought!  But in 2003, I found myself as one of 4 members of a sound healing ensemble, who played gong bath healing meditations at yoga studios, churches, retreats, weddings, baby blessings, organizational meetings and major conferences! 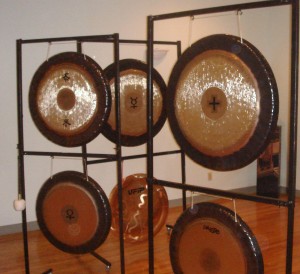 As a holistic counselor and energy healer, I have trained in many different modalities over the years.  Though all of them offer wonderful avenues to healing, I am now totally impassioned by this amazing phenomena of sound healing that came into my life quite by chance about eleven years ago when I decided just for fun to attend a weekend workshop on gonging led by gongmaster Don Conreaux at All That Matters yoga studio in Wakefield, RI. I continued to attend subsequent trainings with Don, and out of that came my connection with the 3 other members of this ensemble, and Resonant Voices of the Spheres was born! Though we 4 have since gone our separate solo ways, my passion for the gongs and providing sound healing has only increased with time! I have recently joined in a sound healing partnership with A.Michelle, who is gifted with a rich voice and a multi-octave range, and who channels Sacred Sound in harmony with a variety of indigenous instruments: Native American flutes, rattles and drums.

In recent times we in the West have begun to rediscover how important sound vibration and harmonics, including music, are in maintaining and improving our physical and mental health.  I say “rediscover” because the ancients knew well how important the balance and harmony of our body/mind/spirit is to our health and well-being.  Modern science now supports the ancient belief that all matter emanates from vibration or sound.  Quantum physics has shown that everything in the physical world of our five senses is made up of vibrating energy.  When that energy is out of balance in a person, animal or plant, a blockage or dis-ease may be created.

“There will come a time when a diseased condition will not be described as it is today by physicians and psychologists, but it will be spoken of in musical terms, as one would speak of a piano that was out of tune”        – Rudolf Steiner

Sound has been used for thousands of years to access deep states of consciousness, expand awareness and heal.   Also known as vibrational medicine, the practice employs the vibrations of the human voice as well as objects that resonate – tuning forks, gongs, Tibetan singing bowls – to go beyond relaxation and stimulate healing.

The ancients knew that the healing power of sound can gently restore and harmonize the body, mind and spirit.  The existence of the gong dates back to the Bronze Age, around 3500 B.C.  Evidence suggests that the gongs existed at this time in Mesopotamia. Myth has it that sacred gongs included pieces of meteorites that fell from the heavens. Since the time of Buddha in 600 B.C., all sacred Chinese gongs have been inscribed with the two Mandarin Chinese characters “Tai Loi”, which means “happiness has arrived”. The gong’s ancient use was as an initiation tool for enlightenment, etheric projection and exorcism of negative spirits. It has also been used by Tibetan monks, and the Chinese, for centuries as an aid to meditation.

In recent decades people have relaxed and meditated to soothing sounds, including recordings of waves lapping, desktop waterfalls and wind chimes. In the past few years, the whole concept of sound therapy has begun to take hold among those searching for increased enlightenment, relief of pain, decreased muscle tension, lowering of blood pressure, increased immunity to disease, and just general overall relaxation.   This new/ancient therapy called sound healing has begun to attract a following. 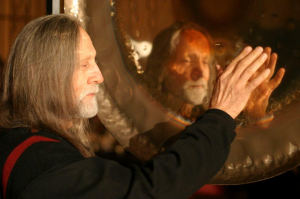 Our Gongmaster and gong instructor, New Yorker Don Conreaux (www.holistic-resonance.com) has used the gong for sound therapy for more than 30 years. He says of the gong: “It really is an engine of power, more than a musical instrument, although it is used in symphony orchestras all over the world. This energy that comes through the gong is not just a fundamental tone, but here all the tones combine together to create a wall of sound. Rather like a tsunami, a great wave.”

Gong therapy can be done one on one with a practitioner or in a group situation. People who have a gong therapy session talk about experiencing waves of emotion and awareness of certain parts of the body. Don says, “Gong therapy is bathing in total sound. In other words, the sound erases all other sounds around you and you are just in this ocean of rolling waves and layers and layers of tones. And the tones go right through the body. They affect you on a mental level, an emotional level, a spiritual level and they cleanse you as they form a purification, which just washes away any worries or cares, and often obstacles that stand in your way of clarity and creativity.” 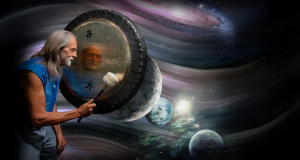 We call it the Music of Wholeness,” Conreaux explains. “Whereas a lot of modalities read your symptoms and approach the body according to your illness, holistic sound healing works differently from that. What we do is approach the body as if it were already whole and complete, then we fill that body with vibrations that emphasize wholeness and resonance, and whatever the problem, the sound will go to that place that needs it and the body will pull it in and the cells will begin to regain their highest potential of resonance, or if you want to call it a feeling of love and completeness.”

“The gong’s resonance is the very music of the spheres; the heavenly bodies of the Universe.  Each planet, moon and star is a gong emanating the divine sound of aum (om) in its variety of vibrational patterns.”     – Don Conreaux

In a gong bath meditation, people can choose to either lie on the floor on a yoga mat with a pillow under their head and knees, or sit comfortably in a chair or on the floor.  The idea is to get into a state of complete relaxation so that the vibrational tones of the gongs and Tibetan singing bowls can wash over and through one and release any blockages in the meridian and nerve pathways.  We play for large and small groups, and in private one-on-one gong healing sessions.

People who have come to our gong bath healing meditations say they like it because it is noninvasive and very relaxing.  Some fall asleep while others fall into a deep state of relaxation in which they lose awareness of the body and connect with their deep inner selves. After the gong meditations, most of our gong-bathers report that they feel relaxed, renewed, energized, released from physical and emotional pain, and enjoy a general overall feeling of well-being that can’t be put into words.  This energy and relaxation can often last for days.  For some people, that alone may be worth the time and price of a group or individual gong bath session!